On December 19th and 20th, eight Hearthstone organizations came together to put on an event to celebrate and highlight the amateur Hearthstone community. Each organization chose two champions to represent them in both constructed and Battlegrounds. This article is a breakdown on the meta at the constructed tournament, looking at lineups, classes, and card choices that each player brought.

In the spirit of this event, we’ve brought together a group of players and analysts from these organizations to provide insight into the meta and the lineups brought. Here is the list of people who helped create this report:

Their social media information can be found at the end of the article – make sure to go check them out.

The meta seems to be revolving around Evolve Shaman, with all but one player bringing the deck and receiving half of the bans. The low winrate is due to players targeting the deck with their lineups, since non-target lineups would ban the deck instead. The spot Shaman finds itself in is a bit of an odd one. It’s a top dog that’s performed amazingly on ladder, and especially in tournament setting, but since it sits at the top, it’s common to see decks and techs that all target it. In a vacuum this would most likely sit as the best deck in the game, but with double Stickyfinger finding itself common in most decks going forward, especially given evolutions after the tournament. Be mindful if you plan to bring it, as a lot of people are aiming for it’s head.

Rogue and Warrior, while not to the same level as Evolve Shaman, have a solid foothold in the meta as well. Rogue had slightly more diversity in their archetypes, but the majority of players brought Secret Rogue. While Whirlkick Rogue has been highly touted as the next big thing, players were not as confident bringing it so soon after nerfs, with only Eggowaffle bringing the deck in their lineup. Either Rogue should be in the running for any lineup looking for a lineup that wants to bring good decks, as either archetype is able to execute their miracle-style gameplans very well, and Edwin finds his way to steal a game or two along the way.

Warrior has a lot of options right now, and all of them have value. Bomb Warrior was silently good before the nerfs, and it still seems good now. ETC Warrior remains a valid option, as well as Enrage Warrior with a Grommash finisher. RonMexico brought a fatigue-like Control Warrior, but it doesn’t seem much better than the other options.

Paladin and Demon Hunter seem to be the two popular options for a fourth deck in this meta. Paladin remains a very strong pick in the conquest format, with most players opting to bring the Libroom archetype over the newly improved Pure Paladin. Likewise, Demon Hunter seems to still be viable despite the nerfs, with both Soul Demon Hunter and Il’gynoth Demon Hunter having niches in certain gameplans. Something we saw from RonMexico was the power of Il’gynoth Demon Hunter when it has a good player using it to the best of its power. However, while it is exceptionally good in the hands of an exceptional pilot, vice versa is true. The deck’s difficulty to play could hide it from the spotlight. Only time will tell to see if the class can remain on the radar.

Speaking of the radar, there were a couple of less-popular decks brought to the tournament. Control Priest, Cyclone Mage, and Zoo Warlock failed to make a splash, and might need some help before they can match the other classes. Somehow, Face Hunter did make a splash in the lineup of the 1st place player, SnakeFawdz. Despite the nerf to Voracious Reader, the deck still seems to have a niche that can be used in Conquest lineups.

Malfurion was probably on vacation that weekend. Let’s hope they show up before the new expansion and set rotation.

Between the seven players who brought Evolve Shaman, all of them brought the minion-heavy Coaster version. SnakeFawdz and RonMexico both brought Revolve, while other players focused on cards like Parachute Brigand, Bogstrok Clacker, and Faceless Corruptor. GarkGus also chose to have only one copy of Lightning Bloom, while all their competitors brought two copies of the card. Instructor Fireheart appears to be a staple in the deck now, with all seven players bringing the card to the tournament.

Eggowaffle, the only player to bring Whirlkick Rogue and no Evolve Shaman, also brought the only Libroom Paladin with a dragon package of Redscale Dragontamer and Amber Watcher. All the other players chose to stick to the more common packages for Libroom Paladin. SnakeFawdz included a Kobold Stickyfinger (as a tech for the Evolve Shaman matchup) and an Avenging Wrath, which helped them win a game against RonMexico. GarkGus, Cookiemonst, and linthesis all brought Silas Darkmoon, but only Cookiemonst and Eggowaffle brought High Abbess Alura. The majority of the deck seems to be locked into place now – the remaining task is to find the most optimal cards for the remainder of the deck. 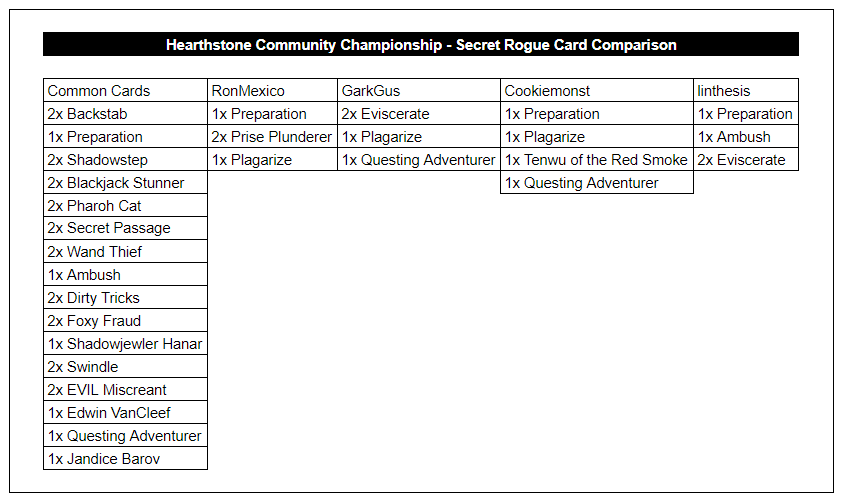 Card choices in Secret Rogue were surprisingly similar, with only a couple of differences between the players in secret choice and payoff cards. GarkGus and Cookiemonst both brought a second copy of Questing Adventurer, likely to help against Evolve Shaman. A second copy of Ambush and a single copy of Plagarize were the two choices that players had in terms of secrets. GarkGus and linthesis both chose to bring Eviscerates, and Cookiemonst decided to bring the new Legendary, Tenwu of the Red Smoke. The majority of the deck has been locked in for a while now, with Edwin still leading the charge of ending games on turns 2 and 3.

Our recommended lineups are, unsurprisingly, the first place and second place lineups. However, there are very good reasons why these lineups did well.

GarkGus’ lineup was a lineup of best decks. Evolve Shaman, Secret Rogue, Bomb Warrior, and Libroom Paladin are all strong decks in the current meta. Smart card choices like Parachute Brigand and Silas Darkmoon help tailor the deck to a variety of situations. This is definitely a good lineup to take if you’re looking to have a strong lineup with few weaknesses.

View all posts by NoProsHere