With the lack of Masters Tour Qualifiers at this time of the year, there is not a lot of data available to document the Conquest metagame early after the release of the Madness at the Darkmoon Faire expansion. There are still a number of third party Hearthstone tournaments going on, and we chose four of them as a sample.

The OHHC Championship Series was a sponsored event where the best teams from South Korea were invited. The final week of THL Pro Series season 4 opposed 10 players currently at very high Legend ranks, and concluded a season in which 12 organizations played round robin. OSC Playoffs had some of the best players from South East Asia and Central America playing in a best-of-three format. Finally, the Tespa playoffs is where the top collegiate esports teams from North America got to shine.

The majority of the top archetypes from last expansion are still strong, though some new decks are making waves. Shaman has climbed to a position of significance, and Warlock is trying to do the same. Regardless of the class or archetype, everyone received new toys to play with.

Demon Hunter remains at the top of the meta for the third expansion in a row, with the Soul Demon Hunter package leading the way. Aggro Demon Hunter, with Acrobatics as a new draw engine, saw play but only minimally. OTK Demon Hunter seems to be a fad, and not a very good one at that. Someone out there (specifically ちぇえん) is trying to prove that Expendable Performers is a card to be scared of. They’ve proven themselves by getting second place in the OSC playoffs, but none of us are convinced.

Warrior is in a bit of an interesting spot. The ETC combo has become popular, and we see a split between the traditional Bomb Warrior and the new ETC Warrior. Enrage and traditional Control lists still come up with some representation, along with Darkmoon’s new Menagerie Warrior. Like Token Demon Hunter, the performance of Menagerie Warrior is moreso due to its low sample size with skillful pilots, and less related to the deck’s overall power level.

Shaman is back, and it’s all because of Cagematch Custodian. Evolve Shaman, utilizing Custodian, Boggspine Knuckles, and a lot of Evolve Shaman classics, outshines almost every other Shaman archetype by a large margin and is the deck to expect if you’re seeing a Shaman. Be warned that, despite the success of the deck, it can prove to be quite reliant on highrolls. To the frustration of our data collector, Custodian has enabled around 7 other archetypes of Shaman to see play in tournaments. It’s a brave new world for Shamans – and it’s not a bad idea to consider adding one to a lineup.


Rogue didn’t gain any new archetypes, instead bolstering its previously established archetypes to great success. New cards like Foxy Fraud can fit into almost any deck, almost always acting as a 0 mana 3/2. Secret Rogue remains the frontrunner of the class, while aggressive variants, relying on either weapon or stealth synergy, and Galakrond lists still popping up now and again.

Paladin is in a similar position as Rogue – new cards benefit the existing strategies, but no new strategies were brought. Some of the new Paladin cards brought by the new expansion have an obvious fit into the existing Pure Paladin archetype, but people are struggling to innovate Libroom to much success. Pure Paladin swaps places with Libroom Paladin from last expansion, but don’t count out Libroom just yet. Refinement for both archetypes should help push both decks further into the meta.

Hunter has an interesting evolution from the last expansion. Face Hunter (and its variants) have almost entirely disappeared in favor of it’s cooler older brother, Highlander Hunter. It’s a pretty consistent core that doesn’t change much between the lists. The most common secret package is now Snake Trap, Open The Cages, Freezing Trap, and Pack Tactics. We often see all four of these in Highlander, with Freezing often cut in Face Hunter. In the OHHC tournament, we saw a few players experiment with Quest Highlander which was interesting, though no one in the west has seemed to adopt it yet, and we’re unsure of how good it is. It definitely has potential, though.

Warlocks either go big with Tickatus or go aggressive with Scrap Imp and/or Free Admission. Tickatus warlock struggles to survive in the fast meta that has come from the first week of the Faire, while Zoo has recently been picking up steam. If we begin to see more warriors and priests represented in these tournaments, Tickatus Warlock may become a safe bring. At this time, Zoo Warlock is likely the better deck for any conquest lineup.

This year, it seems Druid gets a brand new deck each expansion that is reliant on Overgrowth on 4 and doing powerful things soon after. It still works, as Clown Druid was brought by several players this week. It wasn’t a top performer, but it wasn’t a terrible bring either. Some players also dabbled with Malygos Druid, but we don’t expect to see this trend catch on.

Despite getting some new toys, most players steered clear of Mage and Priest. Priest is split between the old Control and Highlander Priest plan and the new and improved Resurrect Priest. None of those decks stood out. Mage is centralized around Cyclone Mage, which did decently. Other archetypes like Secret Mage and Highlander Mage are suboptimal in their current states. 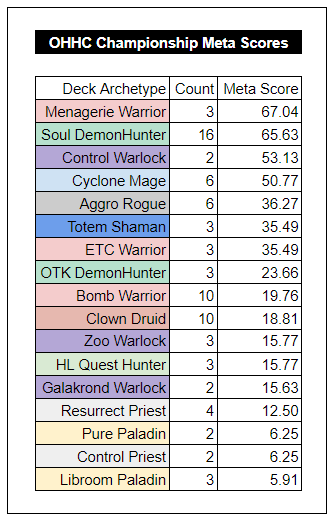 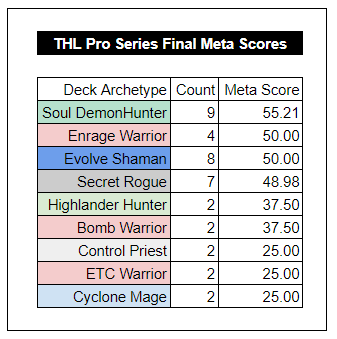 If you plan to play Conquest Hearthstone in the coming days, we recommend bringing Evolve Shaman and Soul Demon Hunter, along with Secret Rogue and a Warrior deck that includes Risky Skipper. Team HypeHorizen won the THL championship, MegaGilscor won the OSC tournament, and Knox College Prairie Fire made it through Tespa playoffs with perfect examples of this. These 4 decks have the best comeback tools that are needed to thrive in such an aggressive metagame. Regardless, the tournament meta still has a lot of room to grow and shift, and there are a lot of places for players to get edges in their lineups.

View all posts by NoProsHere